So, I'm kicking off my 2014 year of awesomeness by running The Charleston Marathon this coming weekend.  I can hardly believe it's only 5 days away.

Last Fall I was getting anxious to cross something off the old bucket list.  By October I decided that running a marathon was it.

Last night I was perusing some marathon statistics:
The average age of women that run a marathon...36.4.   I'm right on target.
The average finish time for women....4:45.   I hope to finish in less time than that.
The % of the US population that have finished a marathon...0.5%.  I shall be happy to be a part of that statistic.

My inspiration through all of my training were two of my friends, Alyssa Mease and Amy Vezina.
﻿﻿
You two are pretty spectacular women and you have both inspired me so much.   The strength and courage you both have shown is what got me through several low points during my training.  The same will hopefully power me to the finish line during Saturdays race.  Thank you both.  CARPE DIEM!

I've seen some beautiful places during my runs and I've scattered some of the pictures from my runs though out this blog. ﻿﻿

My training plan was pretty simple to follow.  It was a 15 week plan with scheduled runs 3 days per week.  Run Monday, Run Wednesday, and Long Runs on Saturday.  As the weeks went on the runs during the week increased in intensity and a bit by distance.  The long runs on Saturday increased in length each week up until a 22 mile long run I did a couple of weeks ago.   I actually ran more than the plan required.   I enjoy exercising in the morning so I started going to the gym and running each morning before work.   I usually skipped Monday mornings though.  Since my very first marathon training run on October 5, 2013 at the Rodale Fitness Park in Trexlertown I have run 484 miles.  I've got about 7 more miles to run this week before my race and then my marathon will put me over 500 miles.  I'm pretty proud of that.
﻿﻿
﻿
I have put more effort and focus into training for this marathon than any other event I've done.  And for the first time, I enjoyed and appreciated every step of the process.  I learned a lot about myself by testing both mental and physical limits.   I learned a ton about the sport of running, physiology/anatomy, and fitness.  This whole experience truly has been such a treat and will always be one of the most enjoyable things I have attempted.


The most scenic run I did was in Fairmount Park in Philadelphia.  I had to do a 12 mile run one weekend and I just happened to be in Philadelphia during that time.   My super awesome boyfriend mapped out a running route for me that was just beautiful.  I ended up running over 13 miles that day because I was having such a great time.  If you're in the Philly area, I absolutely recommend Fairmount Park and the loop around the river.

I learned that running is also a mental challenge.   If your mind is engaged in a positive way, you're run goes by faster.   Sometimes it's over before you even realize it! Several times I ran farther than I needed to because I wasn't paying attention to my mileage.  I did a lot of my long runs in areas I'm not familiar with.   New scenery kept my mind stimulated and time usually passed quickly.

The "worst" run was a 16 mile run I did in my home town.  It wasn't an ideal location as I figured my mind might get a little bored.  But I was home for the weekend and I didn't want to drive some place just to run.   I was correct.  I got bored.  I mentally struggled to keep going.   I didn't map out a course because I know the area I live in. I just ran from my front door and decided to go where ever.   I ran all over my town and I felt like I was running and running and running the miles were ticking off slowly.  That was the last time I did a long run in my home town with out the purpose of getting out of town. 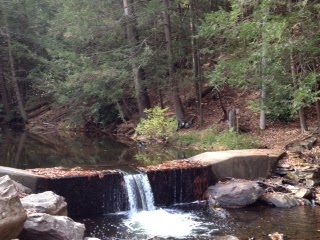 I learned that if you run with purpose, you run faster.   For example, my 'worst' run I described above.  My pace was slower than average on that run because I was just meandering around trying to get mileage in.  My pace was faster when I had a set route to following as I was running with purpose - to actually get some place.  I incorporated races into my long runs so I didn't have to carry water when I ran.  (Carrying water and food was the biggest pain.)  My pace was also faster when I ran a race as part of my long runs.   You always run faster in a race, but I found I also ran faster to the race and running home from the race.  I had purpose on those days.


﻿﻿﻿
The longest run I did was 22 miles.   I ran around my home town (for just a bit) and then I ran to the next town over, I ran past the edge of that town, and then I ran home.  I remember heading out of town that day being nervous.  I kept thinking I can not believe I am running to Boiling Springs (the next town).  Then when I got there, I couldn't believe I was also going to run just beyond that town.   I could not believe I did it.   That's seriously some place you drive to.  No one RUNS there.   I did.  And I'll likely not do it again.   The run home was pretty long.  But I still look at my garmin link from that run some times and think I can NOT believe I ran to Boiling Springs.   Rad.

I did a 2 mile taper run tonight.   It was supposed to be a slow run at an 11 minute mile pace.   I felt awesome so I ran at a pace I found to be comfortable.   Turns out it was one of my faster runs.  I'm amazed at how much my fitness has improved.  When I first started running with consistency in the Fall, my comfortable pace for a short run was about a 10 minute mile.   Tonight my pace was an 8:30 min/mile.  My boyfriend commented on our last ride that he doesn't have to wait for me at the top of climbs as long any more.  Going up hill on a bike still hurts as much as it always has.  I just get there a little quicker now I suppose. 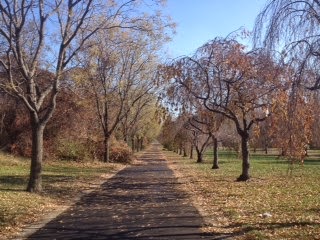 I've only ever trained for bike races before.  And I'm usually freaking out, nervous, and can't sleep for a week before those big events.   For this race though, I'm super excited.  I'm looking forward to toeing the start line and finally getting to experience what I've been training for.  I've been having a lot of problems with both of my knees, specifically my left knee.   Fingers crossed that by some miracle they hold out for at least 25 miles on Saturday.   I'm pretty sure I can crawl the last 1.2 miles if necessary.  Stephen will be at the finish line waiting for me and nothing will keep me from getting to him as fast as I possibly can.   He has been an absolute saint the last 15 weeks.  His patience, support, route creation, and leg massages were more than I could have ever asked for.  I truly am very lucky.  Thank you Stephen.  I love you and I will run as fast as I can on Saturday so I can get one of your giant hugs as soon as possible.

If you're considering running a marathon, do it.  It's an excellent experience.   You only get to run your first marathon one time.  I gave my training all I had to give.   If my knees can hold up on Saturday I know I can finish.  If by some chance I don't finish, it's okay.  I've already had such a great experience.  Finishing the race is just the icing on the (vegan) cake.  If I can do this, it's proof that you likely can as well.

My 1995 high school graduating class motto was "The journey of a thousand miles begins with a single step."